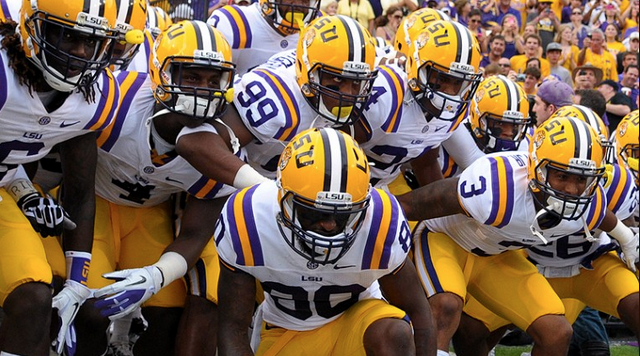 College football has gone crazy about uniforms. Many schools use social media to announce what combination they are wearing for each game, while others maintain the same classic look for decades.

You know what you are going to get from teams like Georgia, Auburn and Alabama. These schools are steeped in tradition and their uniforms reflect that. Meanwhile, Missouri, Kentucky or South Carolina might throw in different nuances every single game during a given season. Regardless, each style and color combination contributes to the spirit and unabashed pageantry of the SEC.

Classic and clean. It gets no better in college football. Auburn’s road white-on-white uniforms are as eye-pleasing and easily identifiable. There’s something about that distinct navy blue/orange combo that has alway set Auburn apart and they have the success to back it up.

Perhaps no uniform in sports is as synonymous with a place as LSU’s purple and gold is to the Louisiana bayou. We all expect the Tigers to show up, home or away in the signature white jersey with the horizontal stripe and gold pants. They differ from this combo here and there, which has been hit and miss. The purple jersey is striking if not a little overkill, but the classic look is hard to beat.

Texas will bring its one-of-a-kind burnt orange to the SEC in the near future and, with it, one of the more recognizable helmets in all of college football. The Longhorn unis are a tremendous mix of classic and clean with 70 years of history and tradition behind them.

Much to the delight of Rebel fans, the school has frequently brought back the astonishing powder blue helmet starting with the infamous Hugh Freeze era. That helmet with the red jersey is, undoubtedly, Ole Miss’ best look overall but the navy blue on grey is quintessential all the same.

With very limited changes throughout the years (black jerseys on occasion notwithstanding), Georgia’s red and black is a true representative of the school’s proud history. The classic black “G” on the helmet is as well known to the south as sweet tea and Jason Aldean and with the subtle, signature font style, Georgia’s uniforms are synonymous with success, class and sophistication.

We all associate Alabama’s simple crimson and white uniforms with utter dominance and unabashed college football tradition. The Tide boast 17 national championships and they have accomplished it with very little change to their attire. The simple number on the helmet has been often imitated and rarely duplicated and in a world where uniform designs are often the rate, Alabama fans seem content with consistency and…winning.

Florida recently joined the select “Jordan club” and the uniforms have maintained their integrity through the change. There is something about that bright blue and orange that is extremely pleasing to the eye on a beautiful, sunny college football Saturday in Gainesville. The Gators look especially ravishing in their road white jersey and blue pants which are staples of their colorful wardrobe.

Ok, admittedly, the switch from ADIDAS to Nike was a good move. If you have ever been a visiting fan inside Neyland Stadium, there is a good chance that your eyes will cross and you will go colorblind forever while trying to process it. Despite this, there is no doubt that it makes the Tennessee brand stick out and you know who is playing immediately when you turn on a Vol game. The white-on-white road uniforms are pretty slick actually, although, I think most Tennessee fans will agree that they do not wish to see the black jersey or all charcoal look ever again.

Mizzou has gone the Oregon route in the last few years as they’ve boasted countless combinations. Some were outstanding, some were…not (we’re looking at you all-gold’s). Regardless, Nike has been a great fit for Missouri and recruits are all about the different thread options. They’ve hit the refresh button once again heading into 2021 and many are applauding the latest changes.

The Razorbacks have gone back to a more classic, clean look in the Sam Pittman era. The white-on-white road look is really sharp and they’ve abandoned the matte helmet finish. Things are looking up for Arkansas, at least in the looks department.

There is something about maroon that is just very…blah, unless you are driving a 1991 Chevy Corsica. A&M have gone through some subtle uniform changes of recent, but have gone more classic under Jimbo Fisher. The white helmet is a nice touch for road games, and anytime they use the state of Texas sticker it’s going to be a winner.

The Gamecocks have used a lot more of the black jersey/pants during the Will Muschamp era as opposed to the mostly garnet uniforms of the Spurrier era. It’s hard to top the white Gamecock “C” helmet with the black and garnet stripes although the black helmet looks better with the matching pants.

The Wildcats have trotted out quite a few different looks in the Mark Stoops era. The chrome helmet is a bit of a miss and the random use of the black jersey with blue pants has never been very pleasing. The checkerboard on the shoulders has been a nice fixture and Kentucky usually looks their best when they keep things simple.

It may seem to celebrate simple and classic looks like Alabama and Texas, while at the same time looking down on Oklahoma. The crimson and cream of the Sooners has always come off as trite and extremely boring. While the OU logo is recognizable, it’s also one of college football’s most thoughtless. The alternative unis complete with crimson piping around. the shoulders is, however, a step in the right direction.

It always seems like Vanderbilt is trying to find an identity, both on the field and with their uniform schemes. The black on black home unis are solid and give the Commodores a bit of an attitude, but the road whites with gold pants is a bit of an eye sore. We’ve seen things like gold alternative jerseys introduced which have always been unspectacular.

Just call it a maroon bias if you want, but Mississippi State’s uniforms have always been boring and unspectacular. The block M on the helmet is a nice touch, but at the end of the day, the Bulldogs have just never been able to hit a home run in the uniform department.

4 thoughts on “SEC football uniform rankings including Texas and Oklahoma”