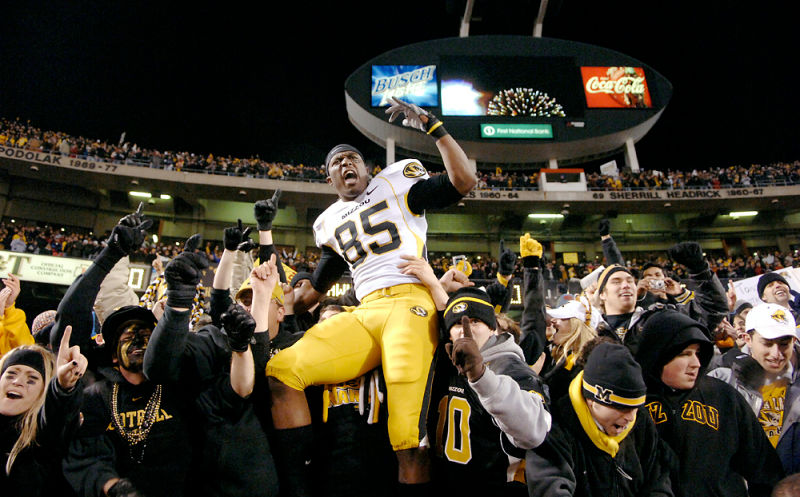 When a great sports rivalry dies (or goes on indefinite hiatus), we are merely left with both memorable and egregious memories which become more distant with each passing year. In the case of Missouri and Kansas, the rivalry dated back to atrocities committed during the Civil War, which made it, perhaps, the most bitter of all college sports rivalries.

It was largely unconventional that the biggest sporting event that ever took place between Missouri and Kansas occurred on a football field. After all, the University of Kansas had never had much to brag about on the gridiron as basketball rules the roost in Lawrence. Missouri had shown spurts of greatness, but had not won a conference title since 1969 and was in the midst of a football renascence under head coach Gary Pinkel.

Despite both teams starting the 2007 season unranked, it was not long before an epic collision course began to unfold. Kansas, led by upstart quarterback Todd Reesing was like a tiny snowball that slowly started building momentum as it rolled down the hill. Four straight non-conference wins positioned the Jayhaws to make a serious run as Big XII play began. Beginning with a narrow victory over rival Kansas State, the Jayhawks slowly began chipping away at the conference. Road wins at Colorado, Texas A&M and Oklahoma State were huge, but it was the whipping that they put on the Nebraska Cornhuskers (76-39) that really made the college football world pay attention. 11 games into the season, the Jayhawks stood atop the Big XII North at 11-0 and were ranked #2 in the nation as they prepared to head to Kansas City with an appearance in the Big XII Championship Game on the line. Their opponent would be a familiar, yet despised face.

The 2007 Missouri Tigers were led by yet another upstart quarterback from the state of Texas in Chase Daniel. It would be Daniel’s mastery of the spread offense that would help lead Missouri to it’s best football season since 1969. A juggernaut of an offense featuring receivers Danario Alexander, Tommy Saunders,  Will Franklin and Jeremy Maclin, tight ends Chase Coffman and Martin Rucker and running back Tony Temple helped lead Mizzou to its first 10 win season in almost 40 years. Missouri suffered a single loss during the regular season, a shootout with the Oklahoma Sooners, but it was clear that this was a team of destiny as the battle at Arrowhead Stadium with arch-rival Kansas loomed in the regular season finale.

Armageddon at Arrowhead: The Game

“Folks, let this sink in. If either Kansas or Missouri wins their next two games, they will play for the national championship.” That is how long-time broadcaster Brent Musberger welcomed the ABC audience to this rivalry game of unprecedented magnitude. It was also likely that the winner of this game would be the number one team in America on Monday which would only add a bow on top of the real prize which was representing the Big XII North in San Antonio the following week.

So on a chilly Saturday night during Thanksgiving weekend, the largest college football television audience of the year and the second largest crowd to ever witness a game inside Arrowhead Stadium settled in to witness this improbable clash. Kansas (who had given up a home game when the game was moved to Kansas City) claimed they would own 70% of the crowd. A proclamation that would prove to be false by game time as a 50/50 split was quite obvious by kickoff.

The first half saw the two teams feeling each other out like prize fighters during the first few rounds.

Finally, Missouri was able to mount a drive which led to a one-yard touchdown reception by sure-handed tight end Martin Rucker late in the first quarter. The Tigers managed another touchdown in the second quarter as Chase Daniel scrambled to find an open Danario Alexander which further silenced the Kansas crowd. Missouri led 14-0 at halftime and could taste victory at this point.

Chase Daniel continued his wizardry in the second half (he would end the day 40-49 passing, 361 yards and three touchdowns), and Kansas miscues helped give the Tigers a commanding 21-0 lead in the third quarter.

“They (Kansas) have never seen anything like this.” ABC analyst Kirk Herbstreit said as Missouri seized control of the game. “You get the feeling Kansas is shell-shocked. Like they don’t know what hit them.”

But the Jayhawks were not quite ready to fade quietly into the crisp autumn night. They finally managed to get in the end zone with just over 7:30 to play in the third quarter after several previous drives had ended with interceptions, or without points. Missouri, however, quickly erased the glimmer of momentum that Kansas had gained as Daniel’s third touchdown pass of the game gave the Tigers, what appeared to be an insurmountable 28-7 lead as the third quarter wound down.

Kansas quarterback Todd Reesing was able to cut the lead in half early in the fourth quarter and Missouri, who were playing a bit conservative at this point, settled for two field goals in the quarter to keep KU at arms length. With just over 2:00 to play, a strike from Reesing to Marcus Henry made the game 34-28 and the issue was still somewhat in doubt.

After failing to salt the game away, Missouri punted the ball to Kansas with a mere 17 seconds on the clock. On the ensuing play, Missouri defensive tackle Lorenzo Williams and defensive end Stryker Sulak converged on Reesing in the endzone for a safety, a play that put a giant exclamation point on the Tiger victory.

“Safety! Ballgame! Bingo!” exclaimed the radio voice of the Missouri Tigers Mike Kelly. The party was on was on in Kansas City as the black and gold contingent began celebrating the school’s first ever Big XII North Championship and it appeared all but certain a No. 1 national ranking would follow.

The Tigers proved that they were clearly the better team on the field that night and would have eternal bragging rights over their rivals to the west because there had never been (nor likely will there ever be) a bigger spotlight on the two schools in an athletic arena.

Strangely, the game itself was not nearly as crazy as what was to unfold in the days/weeks following the confrontation. Missouri became the No. 1 team in the nation and quarterback Chase Daniel graced the cover of Sports Illustrated after being announced as a Heisman Trophy candidate. The Tigers found themselves one half of football away from playing for a BCS Championship, but Oklahoma was able to overwhelm Missouri in the second half in route to a 38-17 victory.

Now, the Orange Bowl committee had a conundrum on its hands. Missouri had just lost in the Big XII Championship Game, and Kansas had lost to Missouri, yet both teams were eligible to be selected as at-large participants. Controversially, the Orange Bowl decided to go with Kansas, much to the chagrin of Mizzou faithful as well as much of the college football nation.

under an hour, meanwhile Kansas met Virginia Tech in front of several thousand empty seats in Miami. Missouri demolished a solid Arkansas 38-7 while Kansas skated by Tech in the Orange Bowl 24-21. Obviously, both schools can lay claim to having fantastic seasons, but which was better? Kansas won a BCS Bowl Game, although lost to its biggest rival on the grandest of stages while Missouri finished with the higher national ranking and won the head-to-head-battle.

The trajectory of both programs could not possibly have been more opposite in the years that followed. Mizzou has remained one of the top programs in the country as they are top 10 in the country in wins since 2007. They have also moved to the SEC as of 2012 and have managed to stay relevant winning two SEC East Championships in 2013 and 2014.

Kansas, meanwhile, has only notched one winning season since their fabled 2007 campaign and have become one of the worst programs in the country in the last seven years. The Jayhawks have fired three head coaches during this time and, unbelievably, have only won eight conference games since the 2007 season.

One thought on “Missouri vs. Kansas 2007: Revisited”