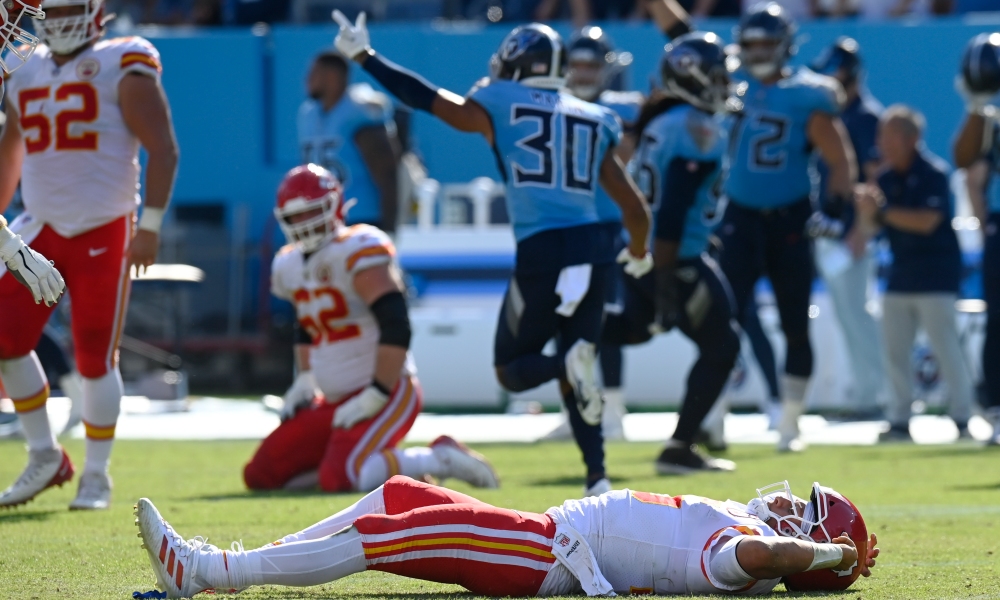 My what a difference eight months can make. On January 24th, 2021, the Chiefs were, once again hoisting the Lamar Hunt Trophy into the frigid night air in route to a second straight Super Bowl appearance. Eight months later and none of it feels familiar. The 2021 Chiefs, AKA: The NFL’s biggest frauds galavanted in to Nissan Stadium in Nashville on Sunday in need of a key AFC victory. Instead, the worst-coached, most undisciplined team in the NFL rolled over and played dead for three hours.

The porous start to the 2021 season begs the question…Did that 31-9 Super Bowl loss break this team beyond recognition or have shaky roster moves, coaching blunders and distractions led the Chiefs to this inexplicable 3-4 start? If we recall back to February 7th, Bucs linebacker Devin White may have offered what would be a bleak omen following the game.

“They weren’t physical enough.” White said. “They’re real gimmicky on offense.” Truer words never spoken and now, with the blueprint in place, the better teams in the AFC are taking turns beating up on the Chiefs.

The Chiefs’ stronghold on the AFC West (five straight division titles) and the AFC itself is now on life support. Four conference losses already hang over the team’s head and the air of invincibility that has existed since Patrick Mahomes’ arrival is all but erased.

Tight end Travis Kelce openly admitted last season that the team was disinterested during the regular season which is a reflection of a spoiled group of players that are not held accountable by the coaching staff.

The 2021 version of the Kansas City Chiefs are unfocused, unserious, undisciplined and could even be in danger of missing the playoffs for the first time since 2014. The analytics say the Chiefs have a 44% chance of making the postseason as of 10/26 but does anyone trust the team right now to beat the likes of Green Bay, Dallas or Las Vegas coming up

Don’t look now but the AFC is loaded for bear. The Chiefs already have losses to the Ravens, Chargers and Bills and Titans. It doesn’t seem remotely possibly that Kansas City will be able to surpass any of these teams in the AFC playoff pecking order. Meanwhile, the AFC West itself has slowly been improving over the past four years while Kansas City has stagnated.

Even Mahomes is struggling

We know all about the defensive woes that plague the team but quarterback Patrick Mahomes threw 11 interceptions in 2019/2020 COMBINED. As of week seven, he’s already thrown nine. Teams are defending the Chiefs much the same way the Bucs did in the Super Bowl. Rush four, drop two safeties back and make the Chiefs pick up short gains down the field. The NFL has landed a counter punch and it’s time for the Chiefs to punch back with new schemes of their own.

The offensive line is worse in 2021

Super Bowl LV aside, the Chiefs line has been a huge disappointment in 2021. We saw GM Brett Veach with the biggest knee-jerk reaction of all time when he decided to completely revamp the line and traded away a first-round pick for Orlando Brown who has concrete feet and has trouble moving in pass protection. You absolutely CANNOT offer Brown an extension this offseason making this a giant blunder on Veach’s part. He cut both is (highly) productive tackles in Fisher and Schwartz and now the tackle position is a calamity with Niang and now Remmers completing a revolving door of ineptitude at that position. Oh, by the way, Eric Fisher is now playing for the Colts after suffering a leg injury late last season.

I chronicled the offensive line issues above. In his four drafts as GM of the Chiefs, Brett Veach has only made one first-round selection (Clyde Edwards-Helaire in 2020). You cannot build a deep roster without first round picks and Veach has blown two of his on Frank Clark and now Orlando Brown. It looks like Veach did a decent job with Nick Bolton (2nd round), Creed Humphrey (2nd round) and Trey Smith (6th round) in 2021 but his pervious drafts are mediocre at best (Mecole Hardman over D.K. Metcalf in 2019 anyone?)

The Chiefs are a reflection of their coach, Andy Reid

as of this moment, Andy Reid is not coaching like the Hall-of-Famer that he is. We’ve long noted that Reid is a players coach that does not focus on the little things (like ball security and penalties) and that is haunting the Chiefs in a bad way this season. Is it the stress of his son Britt Reid’s indiscretions, a more serious health issue or is he just phoning it in? You feel like eventually something is going to come out about this team’s woes down the line. Could this be the end of the line for Andy? There are certainly signs pointing in that direction.

One thought on “Kingdom crumbling: how the Chiefs became yesterday’s news”